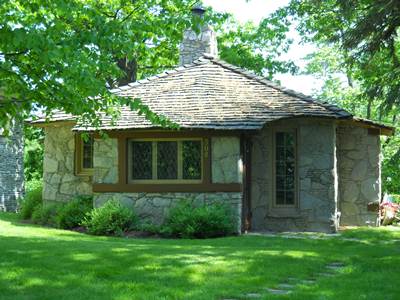 Unique. Unusual. Quirky. Elf cottages. Hobbit houses. Fairie houses. Gnome houses. Fairy tale houses. These are terms that are all used to describe the mushroom houses that Northern Michigan builder Earl Young created in Charlevoix. Young's homes are known world wide and can be seen in just one place: Charlevoix.

Born in nearby Mancelona in 1899, Young moved to Charlevoix in 1909. He attended the University of Michigan where he studied one year of architecture and returned to Charlevoix and began building his quirky houses in 1918. From 1918 through the 1950s, Young built 30 stone homes in Charlevoix and each is so unusual, they are considered works of art.

The houses vary from tiny to huge. Many have undulating stone walls capped by a mushroom shaped cedar shake roof. Windows are framed with boulders. Chimneys have frosted stone caps. Doorways are lined with massive stones.

In his early years of mushroom house building, Young's homes were of the arts and crafts style, a bit like Frank Lloyd Wright. In later years, the shapes became more rounded with a blend of hobbit and fairy tales. Like Wright, Young designed each home to blend into its surroundings which makes each so unique. 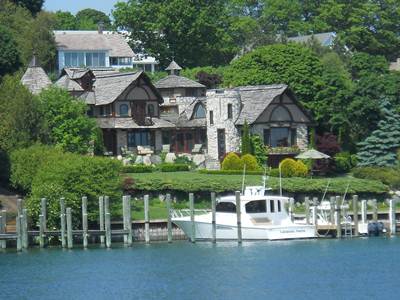 Probably the most photographed house in Charlevoix is Young's Mushroom House at the corner of Clinton and Grant Streets built in 1951. The unusual home has walls that are up to three feet thick. Young also built the Weathervane Hotel on the Pine River.

Young's mushroom houses bring hundreds of visitors every year to walk through Charlevoix and photograph the houses. The chamber of commerce and the Harsha House have brochures that outline a self-guided Young tour.

You may also be interested in reading about the Door County Mushroom House located near Fish Creek in Door County, Wisconsin.